Skip to content
Forums
Getting Started
The Journey
Just How Popular Is... 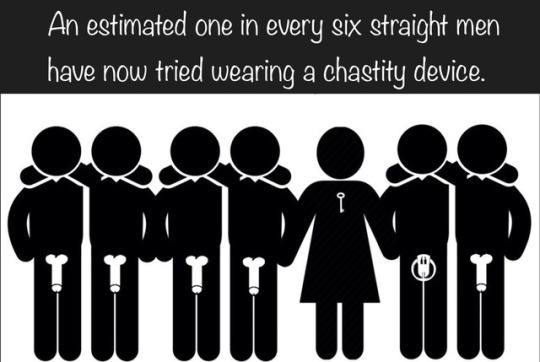 While I don't have any way to disprove or authenticate the statistic in the header image for this blog which states "An estimated one in every 6 straight men have tried a male chastity device", I will say that the trend is growing. One in six straight men sounds high to me but I don't…

According to the women in charge of the site osezlacmc.com, 4% of married or engaged men from Quebec live in chastity. How the survey has been made, it is described in a comment by Julieta. Have a good read!
https://osezlacmc.com/enquete-sur-la-pratique-de-la-cmc/

This is excellent. While the page translates very well, the images do not. I reached out to them to see if they would be willing to work together on a future article. We just have to overcome the language barrier but with the help of Google we should be able to do that. Thank you again for sharing the link I think a similar thing can happen with male chastity. It only takes one book or movie to introduce the idea to men who have never thought about giving control of their cock to their female partner.

I think you are right. A huge amount of people found out about male chastity from the californication chastity scene that I linked in the article. One of my friends brought that up recently and she said that the entire thought of that kind of control made her instantly feel incredibly empowered.

The survey seems to be set up by the women who did the website. It's obviously a pro-chastity site, and they did not post anything about their data collection. That said, 5% doesn't sound like a bad number, and I can believe that 5% of adult men, aged 18 to 60 have possibly tried it out.

When you consider how many Chinese devices seem to be on the market, both knockoffs and original designs, we're probably talking mid-hundred thousand to low million units sold. But keep in mind that many men buy several in their search for a preferred device, while many others languish in the back of the sock drawer.

We've been seeing random articles in the mainstream and off-mainstream news about them; Californication helped, but what it needs is a good Netflix series, or possibly a movie in which a *normal* couple is trying it out and enjoying it to make these take off.

Very interesting. One thing is that each sale of a chastity device doesn't represent a person into chastity. I know that we own about six different models and have thrown out two or three more. Finding the right device is a trial and error process because no two penises are alike!

Side note if you are reading this and scoping out a netflix documentary, Kevin and I would be interested!

I do not know the exact ratio, but it's more than we think. Many couples hide this and me and my husband is not exceptions.

Knows anybody, if there are similar statistics for Germany ?

That's great! I'm sure that clip and other similar encounters have prompted a similar curiosity and desire for empowerment for other ladies. Hopefully your friend's empowerment went beyond simply the thought and to the actual experience of caging a penis herself. I love the thought of more woman adopting this and more penises being locked!

Latest Post: What do we call this Our newest member: Taryn Recent Posts Unread Posts Tags