Skip to content
Blog Discipline Having Fun With It

I removed the shiny stainless steel cage from the discreet brown box and bubble wrap. I removed the three screws from the top and set the cage on Kevin’s night stand along with the pink post-it note that he is so very familiar with. The words “lock it up” scrawled on the top in my admittedly poor penmanship. Kevin noticed the cage a few hours later and brought the key to me. I patted his crotch and we exchanged smiles as I felt the securely locked stainless steel beneath his shorts.

He is used to having me purchase random new cages so he answered my next question without me having to ask. He said, it fits well. I don’t know what the bottom piece is for but the rest fits fine. I asked him that we would have some fun with it later and he looked at me inquisitively but knew better than to push for more details.

Bedtime came around and I pulled the little wrench and three little screws from the tiny ziplock baggie. I called Kevin over and showed him the screws, I showed him where they screw into the top of the cage. He looked at me as if I was crazy and with a gulp he reluctantly agreed to give it a try. Obviously we have our safe word and we can both pull the plug at any time but this could be new and certainly entertaining.

His penis was soft and there was plenty of extra room in the cage. I put the three screws in and tightened them to where there were only slightly protruding into the cage. There was plenty of room for the spikes to coexist with the occupant of the cage at that moment. One of the fascinating things about the penis is its ability to grow. I gently rubbed along the inside of Kevin’s thigh and watched the involuntary reaction as his penis grew and pushed first against the front of the cage followed by pushing itself to the outward bars of the cage. I could tell that he felt tightness and the normal discomfort that comes with a caged arousal. I asked if he felt the spikes and he said that he didn’t. I gave them a couple more turns with the shiny wrench and saw him grimace. I knew that I had found the spot.

He grunted as the involuntary erection came back. This time, more persistent and futile than the last. I told him that he can stay as long as he likes but he might want to go to the other room if becomes is too uncomfortable. We both laughed, his brow furrowed knowing that he would be enjoying what he saw but at what cost?

I played with myself a few more minutes, I could see him watching me then divert his attention elsewhere. I wondered if he was thinking about baseball, his grandma or what he was using to try and counteract his arousal. Whatever he could do to enjoy the show but keep his involuntary erection from those pokey bits. I took my time, enjoying my observation of his struggle between pain and pleasure. I played into it some, arching my back and moaning unnecessarily. It made me feel powerful and sexy, knowing that he was so conflicted but certainly never acted like he was considering my offer of leaving the room.

As soon as I could speak, I rolled over and looking him in the eye. We both laughed at the experience, his was muted with a furrowed brow and some obvious frustration in his expression but we both enjoyed our first experience into pokey play. He laughed and told me how conflicted he found himself. He wanted to watch me and enjoy the compersion of watching me enjoy pleasure. I on the other hand, loved watching his inner struggle that was so real with such very obvious consequences when his ability to control himself got away from him. I debated naming this article “An Exercise In Self Control” but figured that spiky objects was a more entertaining title.

I’ll misquote the often misquoted Oscar Wilde and say that “Everything in the world is about sex except sex. Sex is about having the presence of mind to not let your ding-a-ling get poked with spikes.”

We practice orgasm control as a way to bring ourselves closer together. The evening described above was just an extension of that. Greater sexual exploration and openness makes us both feel closer and improves the level of communication in our relationship. We have fun with it and with each other.

We haven’t tried this again but writing this blog and remembering the experience and the feeling of power and sexy energy might just make me try it again. We removed the cage and put the cardboard box into the plastic tub that we keep under the bed. Next time we might give those spikes an extra turn or two and see if we can crank this battle of the sexy up a notch or two.

About Him Having Fun With It

Don’t want to have sex? Lock him up!

When using such a spikey device … I would think about getting a hard-on twice.

I think, I will not tell my Mistress about it 😉

Thanks MarBe. To reiterate, this was just for play and we had a good time with this one experience. We will probably do it again but this is not a cage that he wears regularly. Probably a wise call on not telling the lady.

I understand. Not for everyday use, but for special occasions. When You are provoking a hard-on.

I received the new spiked cage for me yesterday. It is made out of silicone and I’ll try it today.

There is a nice clip … Using a spikey cage:
[link removed]

I did’t want to create any inconveniences or problems ….

Certainly steps things up introducing this

That’s great. Let us know how it goes. It was certainly an interesting experience for us!

But it will arrive not before the end of June.

I ordered the spike penis cage from onundon, sold by amazon.

Two reasons for ordering such a cage:

2. Sometimes, I’m allowed to use a strap-on to spend pleasure to my Mistress. In combination with the penis cage of course … And twice I ejaculated IN the penis cage. With a spiked penis cage this might be prohibited.

What are You thinking about this ?

Well since you ask…

Give it a try but based on Kevin’s reactions to the spikes, you are probably biting off more than you can chew.

Emma, you have so many great ideas on this site and I am definitely adding this one to my list and searching for a spiky cage! I love your description of your orgasm while he is caught in the sexual tension of wanting to share this intimate moment with you while not wanting his penis to be hurt. I do hope you’ll try it on him again and write about it as it sounds deliciously fun. 😉 Have you tried or considered ordering a cage which can deliver remote shocks to the penis? I love making Mike wear one on his little guy and the added measure of control it provides. I simply give him a small buzz to get his attention when he is wearing it, or increase the intensity slightly for corrective purposes. It’s honestly a really fun way to wake him up in the morning as well and I always get kisses afterwards as his thoughts go from the quick zap of pain to my control. We enjoy using clothes pins and rubber bands on his penis as well at times which I know is getting a bit more into the BDSM kink, but we find a lot of fun to utilize while edging/teasing.

Thank you Emily-In-Charge! I was doing some upgrades yesterday and I don’t think your registration came through correctly. I think I fixed it but I’m not totally sure. I couldn’t get it to fix this particular comment and the other one you did. Sorry

We did play with remote shock cages quite some time ago when we were playing with punishment & discipline. We bought a very inexpensive one and the electric sensation (even at the lowest setting) was extremely unpleasant for Kevin so we tossed it. The small buzz you mentioned wasn’t possible but again, this was a very cheap one. It also had a wire instead of being cordless so that was annoying too.

I was also reading about electroejaculation the other day. Not really relevant and certainly not anything that we want to try but interesting since you bring up electricity.

Although the process of electrically stimulating the ejaculatory apparatus to produce semen for recreation and procreation may sound enticing for some, this is definitely not for leisurely application in the bedroom. For starters, the procedure is usually carried out under general anesthesia due to the pain and contractions caused by the electric current. An electric probe is usually inserted to the rectum, adjacent to the prostate gland to deliver AC current of 12-24 volts at the frequency of 60Hz. The probe is activated every 1-2 seconds with a rhythmic delivery referred to as a stimulus cycle. The voltage is gradually cranked up until ejaculation is achieved. Electroejaculation is nearly 100% successful in men with no neurological defects. However, if the integrity of the nerve is damaged, the electroejacuation can only reach climatic outcome in 80% of cases.

Last edited 1 year ago by Emma
0

Wow, my Women have not required me to use a spiked cage, yet. Gulp.

Curious what peoples’ thoughts are on a cage like this? This is the iron maiden I just found when I did a simple image search. It simultaneously terrifies and intrigues me, but I would 100% allow my ladies to lock me in it if they demanded. 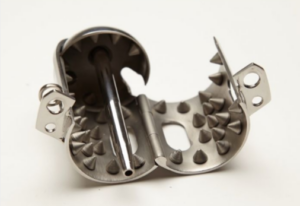 Edit: this is what I tried to post. Sorry about the first one.

Last edited 1 year ago by Emma
1

Hi Emma, I’m not sure what you tried to post here,= but it just came through as a crazy long link? Maybe you could try to repost it?

“If there was a pill that made men behave the way locking his cock up does every woman on earth would be feeding it to their partner!”

Click here to register and most of them go away. A huge reduction in ads is just one of many benefits of registering!